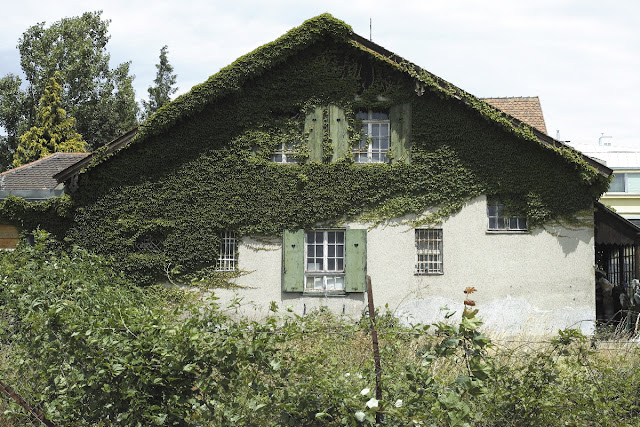 Over the past weeks I've noticed a slight change in my behaviour: I return to places where something (in my eyes) worth being captured has caught my eye – with a camera around my neck :-)

Two days ago I was sitting in the tram, late in the evening. There was no chance, no time and no light for a photo. So I came back another day, during daytime, with plenty of time on my hands.

The sky has been mostly cloudy, rainy and dark but there have been some sunny spells, too. An overcast sky leads to an almost unreal light the moment the sun makes it through the clouds, very focused, turns the sunlight into a spotlight, could be mounted just a few metres away.

And the motiv? The house is quite unique, situated in the outskirts of Vienna, in the 13th disctrict, right next to a tramway station. You could say it is not out of the world, but obviously out of time. The window shutters are made of wood, cut hearts. Hearts! Some window shutters are out of use, vegetation took over. I will keep an eye on this house, see, if it stands the test of time in the near future.

Paula
I live in central Vienna, love to ride my bike and truly enjoy publishing my photos on this blog. Most of the photos have been taken with a 50mm lens.